Well-connected localities for innovative ways out of the recession 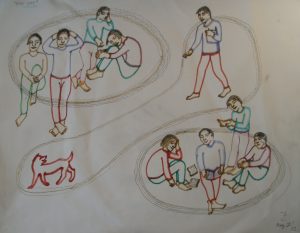 Although I was brought up to be accepting of many cultures and backgrounds, for much of my life, my only first-hand experience was of the white and western way of life. I had no conception of other ways of seeing and acting in the world

My first major experience of other cultures was when our family lived in a rural place where Maori (New Zealand’s indigenous people) were the majority. My children were the only non-Maori at the local school. Until then I had no idea what it would feel like to be a minority culture in my own country. It was as if I was suddenly, to adopt phenomenological philosopher, Martin Heidegger’s term, “thrown” into a very different world. I felt very “de-worlded” and needed to find ways to “en-world” again. Looking back, I now see this experience as seminal because I couldn’t have learnt about this very different world in a book. I had to experience it.

My second major experience of non-Western cultures was when I was co-ordinator of the St Albans Web project (1999-2002) – refer to publication list for more details. I had invited people from diverse cultures to be involved, and in this way met up with Qiyun from China. This contact could have been superficial but for Marissa, another team member from Brazil, who insisted on more meaningful contact.

We began by interviewing Qiyun and learnt more about her culture and of course, more about our own cultures as a result. In the interview I asked Qiyun about New Zealand/China economic relations and if she saw any opportunities for New Zealand. She expressed surprise that we did not do more in developing international education, particularly in Christchurch, which she saw as place Chinese parents could feel comfortable sending their children. She said she was hearing that some Chinese students were unhappy with their living arrangements, and pointed out that it is part of the Chinese culture to not say anything; they would tolerate it, but not come back.

Qiyun saw the problems as arising from misunderstanding and she was interested in helping to develop good local networks in which more effective communication and learning could take place between cultures.  She discussed these issues in person and on a section on the website well before the negative publicity about the standards of care hit the headlines.

While much has changed, for instance, the website no longer has this material, and more attention has been paid to standards of care for international students, I think the need for more opportunities for people (in Christchurch, New Zealand and elsewhere in the world) to be in networks where they experience – first hand – others from diverse worlds is more urgent than ever.

I was thinking of this when I went to hear Rod Carr, the new Vice Chancellor at the University of Canterbury, talk about future directions for the University in the context of the recession (all staff forum 24 March 09)

Carr spoke of the University as an institution which produces knowledge, including knowledge as needed for complex and changing times, and the relevance for, and need to invest in a university education. He also stressed the need for the University to connect with its students, employers, the local community, the city of which it is a part, with Maoridom, and the wider world, in particular Asia.

He said not engaging was not an option.

Carr also spoke of New Zealand’s uniqueness and its vulnerability as a small island nation, and he cautioned, in this context, about the need for the university to set its own direction, and not wait passively for others to set it for us.

I have for a long time thought New Zealand – with its unique mix of Pacific, Asian and Western worlds could develop innovative and effective ways of relating to the world as an intercultural hub.

However, in order to recognise such opportunities I think that, like me, more people need to be able to experience, first-hand, how connecting and collaborating with diverse cultures can open up new horizons of mutual personal and shared social, and also at times economic and diplomatic opportunities.

I also consider that for the University to connect with local and international communities to support this country’s development, including in the wider, global setting, it needs to see itself not simply as a producer of knowledge (which it is, but as one among many such producers) but also as an interface, networker and translator between diverse forms of knowledge, academic and social, cultural, local and global.

The University has an unrivalled base of students and staff, local, international, and multicultural, and knowledge/s from which it can make unique and potentially very effective contributions.

Could the University become an innovative hub for social as well as other collaborative networking between locally-based students and others from diverse  parts of the world? If so, how might the University encourage and support this kind of activity?

What do you think?

We would be interested in hearing from people engaged in connection-building and collaboration between diverse worlds?

I have drawn on Helga Nowotny Vice President of the European Research Council ERC and Professor emeritus of Social Studies of Science , ETH Zurich and Gerard Delanty Professor of Sociology and Social & Political Thought for concepts about possible roles for the university in an innovative knowledge society.